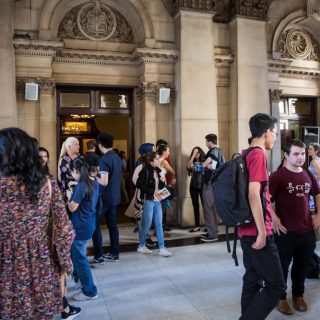 On a balcony overlooking the hustle and bustle of Swanston St, current UROP scholars, undergraduate students and researchers networked over cheese platters and drinks. Since 2004, BioMedVic has placed over 600 students in research jobs and during this year’s Welcome Forum we congratulated and welcomed the 26th round of UROP scholars to the program.

Former UROP scholars, Christina Gangemi (placement at ARMI) and Luke Thorburn (placement at CSIRO), and current UROP supervisors, Janet Newman (CSIRO) and Ashley Buckle (Monash University), talked about their experiences with the program and gave the attendees an inspiring insight into why they were drawn to science.

To add to the visual interest, this year BioMedVic ran the UROP Science to Art Competition. The competition invited our UROP scholars to submit a striking scientific image, portraying their data through creative eyes. We saw spectacular entries and encouraged the attendees of the Welcome Forum to vote on their favourite piece. Thank you to our judging panellist Maja Divjak, scientific animator at GTAC, and congratulations to the Art Prize winner Luke Thorburn for “Phase Space” and People’s Choice winner Lily Zheng for “Cochlea Cell Stains”!

UROP Program Manager Viviane Richter expressed BioMedVic’s gratitude to CSL for their continued support of the program. Dr Andrew Nash acknowledged the success of UROP and left no one in doubt about CSL’s commitment to this exciting skills development scheme when he announced CSL’s continued support as Principal Sponsor over the next three years. He then honoured the new UROP cohort by handing out their certificates and UROP badges. We look forward to hearing about their progress at our UROP Conference Day in July.

A big thank you to all who attended.